Saturday 20th of October “OUR GANG” were treated to a weekend at the U.C.S.A Camp at Winklespruit. The appreciation of sponsors cannot be put into words. We left early on Saturday morning into the buses and combis, with all the luggage, walkers and wheelchairs packed comfortably into the bakkie and trailers driving the 200km (plus/minus) down from Underberg.

On arrival, we were all headed into a collection area, allocated our accommodation for the nights. All disappeared to check theirs and the other rooms and “hostels” to book their beds before being called in for morning tea and roll call.

The beach was out due to icy weather and heavy wind, but having the various Round Table gangs around, a game of cricket was hastily organized. When the second ball was dispatched to the bushes behind the ablution block, it was “Game over”. due to Round Tablers’ ingenuity, 15 minutes is all it took to find another ball ( most likely pinched from some neighbors  dogs?)the match was resumed further away from the bush, with a lot of competitive aggression from both teams but well tolerated by the Round Tablers. Nobody knows who won but nobody cared. Great fun was had by all, as usual, thanks to the amazing spirit of the Round Tablers.

During the match, there was a SMALL distraction/ as those being taken for a ride on the roundtable sponsored quad bike buzzed through the fielders, umpires, and spectators. There has never been such a concentration of grins and smiles in the history of our modern world, thanks again to the amazing caring of the round tablers. Every now and then, one of the cricketers would suddenly disappear and come zooming past on the back of the quad bike as it was his/ her turn for a spin. 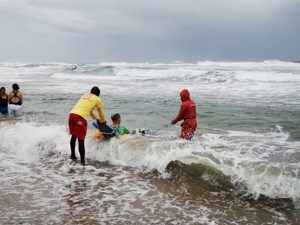 The special way in which Toti Life Savers attended to our residents was just top class. Here they take Nigel Makaay into the sea. What an experience!!!

Lunch was served, and once all had overeaten again, besides the quad bike riders, most residents went for a walk down to the beach (in the wind)or had a lie down to digest their overindulgence of lasagne. Without taking a breath, the tablers got a fire going to prepare the supper to come of HUGE hamburgers and salad washed down with some rejuvenating liquids (non-toxic or alcoholic). Some of the residents were very willing assistant chefs and tasters and it did at least keep them quiet. All the time, the residents were being whizzed around on a quad bike, having photos taken and being cheered every time they passed the braai or someone drinking coffee. While supper was being prepared, a war was declared between the Sharks rugby supporters and a sub-human species who were in favor of some other teams involved that day. Enough about rugby for now.

At 17h00, supper was served after the grace was said and all was quiet for about 15 minutes when we were chased up to get the “DISCO” started. As usual, Mark supplied a fantastic selection that had everybody whizzing around the floor, including wheelchairs, walkers and decrepit old staff and committee members. After the great effort of death dancing, a call was made for everybody to receive their medication prepare for dreamland. Quiet and inactivity at last!! THEN! Some snores were greeted with growls, curses and complaints of ” Why were we teamed up with so and so” or “Shuddup or chuck them outside!!”

Sunday morning, with remarks of “did you hear so & so snoring, he/she sounds like a pig/donkey/dog barking or such, arrived and breakfast was prepared while everybody regained their mental states. Tea and coffee were served with the most delicious bacon and egg rolls for which most where demanding seconds. During breakies it was announced a trip down to the beach had been arranged to a screech of elation and all wanted (except the staff and workers) to get going as soon as possible. We loaded up and drove through Amanzimtoti main beach where they arranged special parking for the buses/combis and had about a dozen life saver there to welcome us and help unload the residents. The willingness and attitude of the lifesavers were beyond brilliant as they lifted, carried and served the armada down to the bank or water’s edge. The biggest surprise was the beach wheelchairs ( go-cart thingy), available free of charge which they loaded our residents onto and wheeled them down to the water’s edge before immediately running back to load up another one. Amanzimtoti community, be proud of the best lifesavers I have ever met. Their dedication and attitude are absolutely beyond belief. I am very old and have been a beach lover in the 1950’s,60’s and 70’s. Brilliant, Amazing, well-done guys.

With the weather not being friendly, (cold and windy) we did not stay long and the ‘lifies” had the job of returning all our less firm residents back to the parking area and loading them into the vehicles to return to the resort.

Back at our temporary home, it was back to a bit of cricket, movies and the forever zooming quad bike and a short rest for the workers. But not the round tablers who immediately struck up the fire to braai some boerewors for rolls for our lunch, again assisted by the residents who are braai experts and were hoping for titbits. After grace was said we enjoyed some lekker wors rolls with salad and then there was a short quiet period of about 30 seconds while dishes and dining rooms were cleaned up. Again after lunch, there were some more movies and a large group decided to walk down to the local beach just to walk in the sand, except Trish, who when she arrived back had suspect wet slacks on. (she claims a rogue wave caught her unaware.) A group of young ladies,( Hit The Spot) from Amanzimtotisupplied us with a large meal of chicken-a-la-king for supper for which we were extremely grateful. Well done and keep up the enterprise. A quiet evening followed with more movies and various groups sitting around chatting, ogling the boys etc. Except for some committee members ( Trish and Sister Christie) and some staff members who skinnered, scandaled and were completely unruly but entertained us as well as a large number of residents for a long time. 19:30 was time for medication and dreamland with little need of persuading residents to climb in and sleep until breakfast again. 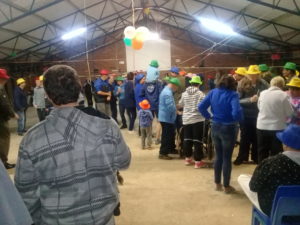 Monday morning came and the magic bacon and egg rolls were again served to the delight of all, and then serious cleanup and packing were organized before loading up and winding our way back to our heaven, underberg.

The trip was uneventful except for one combi which decided it was too old for all the work and with the understanding hands of Mr. Mingay was replenished with water and nursed back home. Its behavior will be investigated and necessary disciplinary action will be enforced.

To end, mention must be must be made of the specific people and organizations who are responsible for this amazing event in our lives at Pevensey: