A beautiful sunny day up here in the mountains.

The day started with the march past of all the team competitors and their coaches into the arena at the pool.This was supported by the music from our esteemed music man Marc Cameron who played the relevant Championship music and marches.

Down to the business of competing and destroying the other teams ( possibly drowning them assaulting them under the water) but all managed to survive. 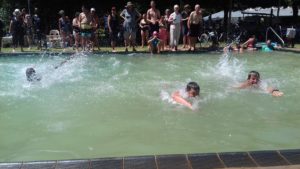 When we hit the water we swim hard!!!

The early lead was achieved by the Tadpoles who kept up the pressure right through to the very end. This was to be expected as the previous day the Sharks had lost to the Lions in Johannesburg and the Dolphins were not really sparkling in the cricket world so we will put the blame on them.

A very special thanks goes to “the Swim Chix”, a group of ladies from Pietermaritsburg who once again came through to help our Pevensey Family. These Swim chix were Shivaun, Amy, Courtney and Ashleigh, one of whom was an Easter Bunny and the other name was not repeatable (given by her sister). These are the people we need in Sports governing. WELL DONE GUYS!  Another special thanks goes to Ru Nyathi who assisted the Tadpoles tally up a good solid score.

The individual diving was won by Daniel Pienaar (male category) and Cheryl Chrichton for the ladies. Certificates were then handed out to the individual achievers and the team trophy was handed to the Tadpoles captains and just about everybody dived into the pol to go crazy and cool off again before adjourning to have lunch and drinks before cleaning up and going home for a short holiday. 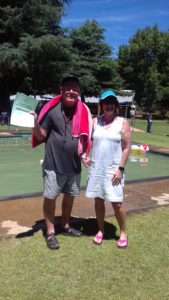 A big immeasurable thanks must go also to the staff for their hard work preparing the pool, setting up, trainning and managing the day. This means everyone of the staff!! Thanks a million